Visiting Duke Farms in the Heart of New Jersey 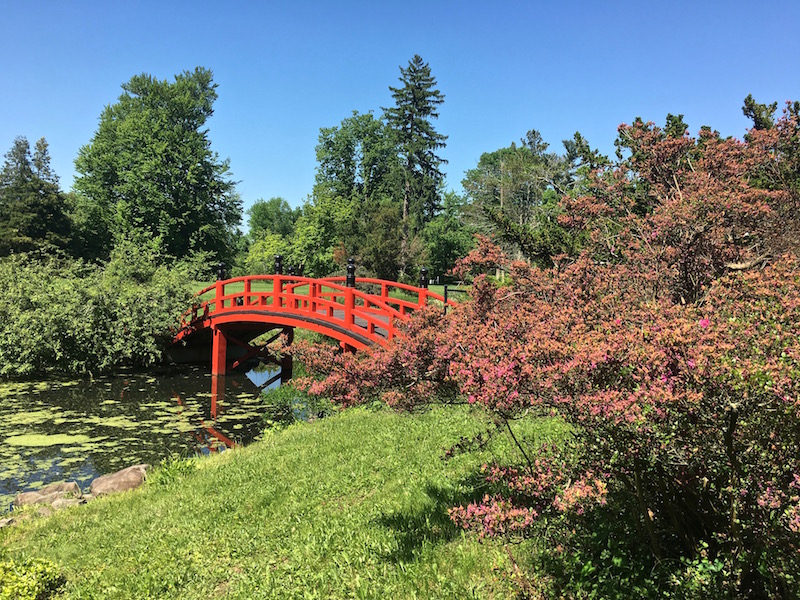 If you live in the Northeast U.S. or are just passing through, visiting Duke Farms in Somerset County – “the heart of New Jersey” – should be on your list! There are 1,000 protected acres you can explore for free all year round.

Even though I haven’t lived in New Jersey since I left for college at the age of 18, I’ve remained fiercely loyal to my home state. Now as a travel blogger, I’ve tried to show that it has so much more to offer than what has been depicted by “The Jersey Shore” or “The Real Housewives of New Jersey.”

Over the past year, I’ve tried to get to know New Jersey a little better by checking out destinations that I’ve never visited before. In December, I spent the weekend eating, drinking and shopping in the Shore towns of Asbury Park and Red Bank (Ocean County). Then in May I toured Duke Farms – 3,000 acres of land that has been set aside for conservation, education and recreation in Somerset County.

Given that Duke Farms’ mission aligns so closely with my own values and interests, and it’s only about 45 minutes away from where my parents live, I was disappointed that I had never heard of it until Somerset County Tourism reached out to me this winter. It made me feel a little better, though, when I learned that it only has been open to the public since 2012.

Industrialist J.B. Duke purchased the land in the late 1890s and transformed it into his country retreat. His daughter, environmentalist and philanthropist Doris Duke, inherited the land when he died in 1925, and she later directed in her will that Duke Farms be used for wildlife conservation and scientific research. Even though today the property is surrounded by some of the most expensive and coveted real estate in the state – if not the country – Duke Farms will forever be protected from development thanks to the Doris Duke Charitable Foundation.

I toured Duke Farms on a warm and sunny afternoon. Since there’s a lot of ground to cover – the public can explore 1,000 acres including 18 miles of walking trails and 12 miles of bicycle trails – Nora DiChiara, Director of Strategic Planning & Programs – was nice enough to give me a lift in a golf cart. During our drive, she filled me on Duke Farms’ impressive commitment to sustainability and the fascinating habitat restoration work that’s currently underway (to replace previous landscaping with native plants). We also checked out a few noteworthy sites on the property:

I met Nora at the Farm Barn, a LEED© Platinum, 22,000-square-foot structure that once served as a horse and dairy barn. Today the first floor is where you’ll find the Orientation Center, which contains displays about Duke Farms’ history, its sustainability efforts and the habitat restoration work. You also can watch a brief film.

From the Farm Barn we drove to the Hay Barn. It’s pretty hard to believe a structure this grand was once used for hay, but it seemed Duke was a little over the top. It burned down in 1915 and was never rebuilt, although the stone walls are original. Doris placed the sculptures here herself.

The Orchid Range is a LEED© Gold building. It contains an impressive display of subtropical and tropical orchids. This was probably my favorite stop – it’s magical!

Built in 1903, the Coach Barn once contained horse stables on one end and Duke’s office on the other end. Today, it holds educational classes and conferences.

Duke Farms’ lake system includes seven lakes. The one we visited is pictured at the top of the post – Duke had it landscaped in the style of a Japanese garden.

The “old foundation” is exactly what it sounds like – the foundation for a mansion that Duke never finished building. He abandoned construction in 1918 and donated the remaining materials to the U.S. war effort. You can get a lovely view here of the Great Meadow, where a lot of the habitat restoration work is taking place.

After wrapping up with Nora, I walked over to check out the Community Garden, which encourages sustainable gardening practices and is one of the largest of its kind in the country. Unfortunately the fence was locked, so I could only look in from the outside. (Apparently gardeners are really sticklers about rules – I asked one to let me in, and she refused. Oh well!)

To cool off, I stopped at Farm Barn Café, which offers a nice variety of drinks as well as local and organic salads, sandwiches and snacks. Every Sunday from 10 a.m. to 3 p.m., May through October, it’s the site of the Farm to Table Market, featuring more than 20 vendors selling local produce, meats, cheeses, crafts, and wine.

I was so impressed by the wide range of programs that Duke Farms offers to educate both children and adults about the land, and encourage their enjoyment of it. Here are just a few highlights:

Duke Farms is an American treasure, and I look forward to going back and exploring the property by bike later this summer. My visit proves that it’s worth taking another look at your hometown and seeing if there are any new attractions nearby – or even familiar places that you can see with new eyes.

Thank you to Somerset County Tourism for arranging my visit to Duke Farms and to the Duke Farms staff for giving me a tour.

Filed Under: North America
One Day in Newport Beach: the Best Things to Do
Best Winery in New Jersey: Sky Acres Winery