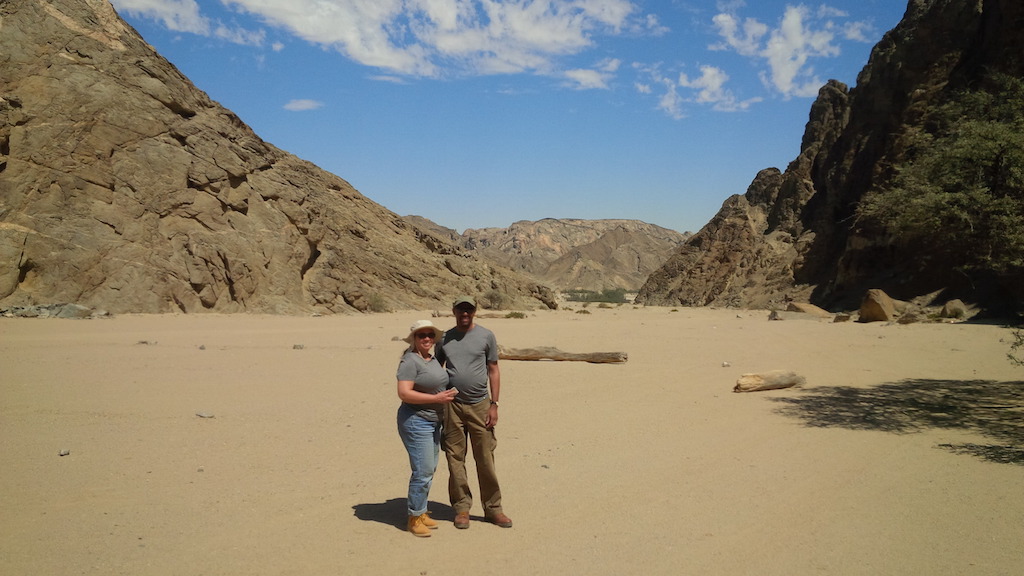 This is the first husband-and-wife profile to grace the Traveling Lives series, and I couldn’t have picked a more appropriate – or talented – couple. Attorneys Ian & Tonya Fitzpatrick have made travel a priority since the very beginning of their relationship, and today, they run an award-winning broadcasting company, World Footprints, that celebrates “Responsible Travel, Culture and Heritage.”

Tonya: Before entering the world of travel media, our life together began with a travel theme. I had lived and traveled abroad, so when I was introduced to Ian, I inquired whether he had a “used” passport because I wasn’t interested in dating anyone who had never traveled abroad. Luckily for Ian, he had traveled abroad.

Ian continued the travel theme when he “kidnapped” me to Toronto and proposed. We were later married on the island of Bermuda. Shortly after our marriage, we decided to pursue a traveling life and open a travel agency. That decision was spurred following a conversation with a life coach who we meant on a trip to San Francisco. We started doing travel segments on the local CBS and NBC affiliate stations, as well as a national cablecast on Retirement Living. Those segments gained the attention of a top-tiered radio station in Washington, DC, and we were invited to begin a travel radio show. The rest of our travel media journey is history.

Today, we spend considerable time developing World Footprints into a sustainable venture. We have won several industry and broadcast awards, and we are also in discussions with networks about a television show.

However, we still work as contract attorneys in order to keep the lights on. Our work allows us flexibility when a travel opportunity presents itself. We are not tied to a vacation schedule, so we have the freedom to go and come as we please without restrictions. This year we have spent a total of six weeks abroad (Israel, Namibia, South Africa and Mexico), and our recorded interviews (nearly 50 hours) will be edited for an upcoming show.

Ian: We have integrated travel into a second career as broadcast travel journalists to give us a break from our more mundane lives as attorneys in Washington. Travel is important because of the opportunities it brings for education, cultural enrichment and building relationships with people around the world. It gives meaning to our lives in ways we haven’t had as lawyers for the most part.

Travel connects us to the world. It helps eradicate prejudice and allows us to acknowledge that we all share a common humanity.

What are some of your first travel memories?

Ian: As a child, I remember going to Niagara Falls on a long bus trip. I took trips, on separate occasions to Montreal and Toronto. These were significant because these were my first trips by plane. Also, I remember my first trip to the West, when I fell in love with San Francisco and visited Los Angeles and Las Vegas, as a 10-year old.

Tonya: As a child I enjoyed trips to Niagara Falls, Toronto and Montreal. I didn’t travel abroad until my 20s. But those early memories of Canada sparked my interest in other cultures.

I remember always looking forward to an aunt and uncle’s visits from England during my childhood. I loved their accents and quickly adopted a British accent and really put it on when playing with other children on the playground. My “accent” made me a popular kid, and I promised myself then that I would one day move to London. Twenty years later I did just that when I enrolled in graduate studies at the London School of Economics.

While in London I took every opportunity to travel to other countries because by that time I had an incredible network of international friends that I had acquired during my time in California. Although my interest in other cultures began at an early age, my wanderlust was fueled when I moved to England.

Tonya: I have too many wonderful travel memories to select just one. I suppose my first time in Russia and my experience studying in China are memorable because traveling to those countries was unique.  However, our honeymoon in South Africa and the magic we experienced on recent trips to Namibia and Israel were all transformative.

Ian: My first plane trip when I was five. My mom and I flew to Montreal, and I had my first immersion experience in French. That experience changed my life and my perspectives. As a couple, we have had a destination wedding in Bermuda, a honeymoon in South Africa, and most recently trips to Russia, Israel and Namibia that have been eye-openers.

Ian: That we travel all the time. We set aside a number of weeks each year when we are willing to travel for extended periods. Also we look at opportunities to take weekend and extended weekend trips close to home so that we don’t take time away from our day jobs as attorneys.

Tonya: That we take too many risks by traveling to conflict zones. In reality we know that mainstream media will often embellish conflict in order to increase ratings, so we travel to certain places to tell the true stories. For example, we traveled to Sochi, Russia, at the beginning of the Ukraine/Russia conflict, and there were a lot of stories about fighting and terrorism threats at the Olympic and Paralympic Games. Instead, we experienced joy, pride and hospitality beyond measure. Certainly there was a security presence, but it did not overshadow the Games.

Same in Israel…we traveled along the West Bank between Israeli and Palestinian settlements. We never witnessed any conflict and never felt that our safety was at risk.

Tonya: Just travel. Don’t make excuses about time or money because there are many opportunities to travel inexpensively. If you’re looking to travel abroad for the first time, go to a country that shares a similar language.

Ian: If you are ready, willing and able to do it and can fit it into your schedule, pray about it and just do it because life has a way of getting in the way. If you don’t have a passport, get one. Take advantage of programs such as TSA Pre-Check and Global Entry to minimize time spent standing in airport lines.

Banner image: in Namibia on the former set of Mad Max