Here is my NYC Urban Adventures tour review. I spent a January morning learning about the immigrant experience in three lower Manhattan neighborhoods on “Tenements, Tales, and Tastes” when I was in New York City for IMM and The New York Times Travel Festival.

Until January, I thought there wasn’t much I haven’t seen or done in New York City. I grew up in New Jersey –  less than 90 minutes away – so I took countless field trips there during school. I’ve gone to the top of the Empire State Building, waited in line for last-minute Broadway shows, walked over the Brooklyn Bridge, and even checked out Carrie Bradshaw’s house. As an adult, I’ve spent numerous weekends there with my friends, exploring their neighborhoods and favorite spots.

Thanks to NYC Urban Adventures, though, I got to experience a whole new side of Manhattan on its Tenements, Tales and Tastes tour, which leads you through the Lower East Side, Chinatown and Little Italy. The tour explores the history of the immigrants who helped make the city what it is today and celebrates the foods they brought with them to their new homeland.

Urban Adventures, a tour company that has a strong commitment to responsible travel, provides small group tours in 96 countries around the world – I previously took its Cu Chi Tunnels tour outside of Ho Chi Minh City in Vietnam – encouraging you to put away the guidebook and get a little taste of life as a local.

I met my group at the City Hall Park fountain on a very sunny – but very chilly – morning. There were eight of us – a couple from Houston, a young woman from Adelaide, Australia, and a couple from St. Louis who were joined by their daughter and her roommate, who relocated to Manhattan after college. Our tour guide was Josh, a 30-something Connecticut transplant, who you’d swear was a native due to his deep knowledge of and enthusiasm for his adopted hometown.

He kicked things off at the very beginning, with the Dutch establishing “New Amsterdam” on the southern tip of Manhattan Island in 1625 to facilitate trade in the New World. In their honor, Josh handed us each one of my favorite Dutch sweets, a stroopwafel, which I took home and enjoyed later with tea.

Making our way through the park, Josh pointed out Dutch elements on the city buildings that surround the park, and then we took a brief look at the African Burial Ground, which unfortunately is covered in scaffolding for the moment.

Next up was Thomas Paine Park, where Josh told us captivating stories about the city’s early Irish immigrants, who battled disease, death and each other in the notorious slum that stood on that very spot during the 19th century, and Columbus Park, where we learned how Chinese immigrants became the largest immigrant population in the city.

Then it was time to eat. 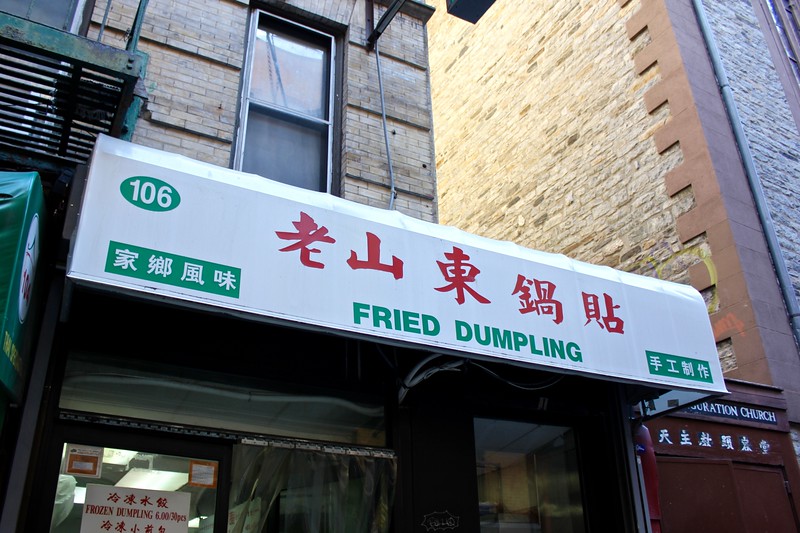 Our first food sampling took place in Chinatown at Fried Dumplings. Yes, that it the full name of the restaurant, and that is all they serve. The interior couldn’t be simpler either. Behind the counter were too older women – one manned the fryer and scooped us each a plate of dumplings – while the other woman was in charge of preparation. 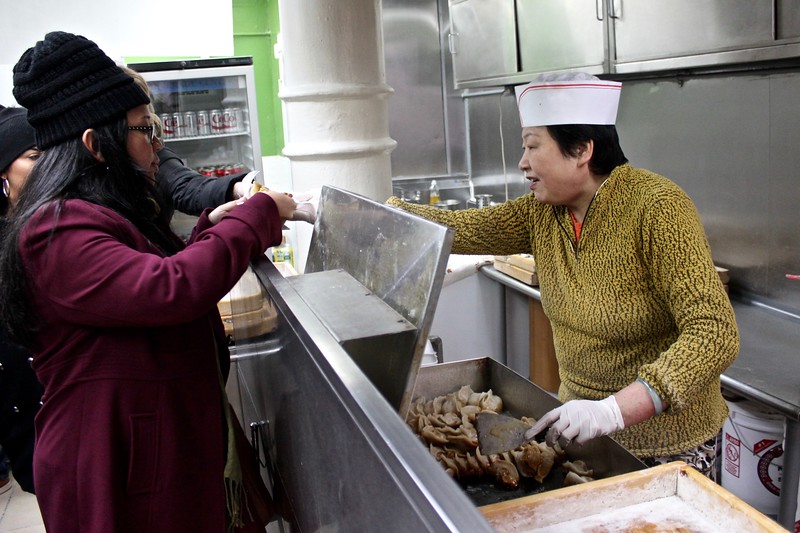 Josh thoughtfully arranged for me to have vegetarian dumplings, and they were filling and flavorful. The dumplings cost only $1.25 for six – prices are low because inventory is low – and Josh revealed he regularly picks up a frozen bag and passes them off to his friends as homemade. 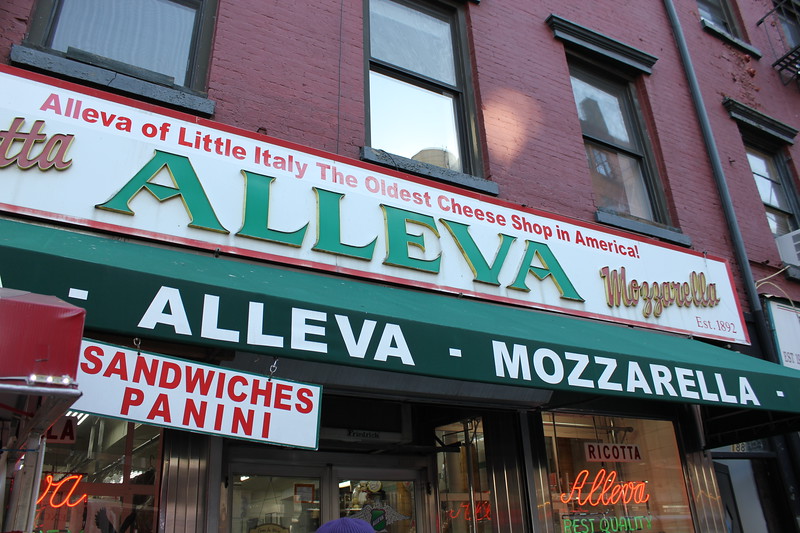 The Little Italy stop was my personal favorite. Even though my great grandparents came from Italy and passed through Ellis Island, I’ve never been to Manhattan’s Little Italy before. Even though the neighborhood has changed drastically over the years with sky-high rents squeezing out old businesses, Alleva has been in business since 1892, which makes it the oldest cheese shop in the U.S. 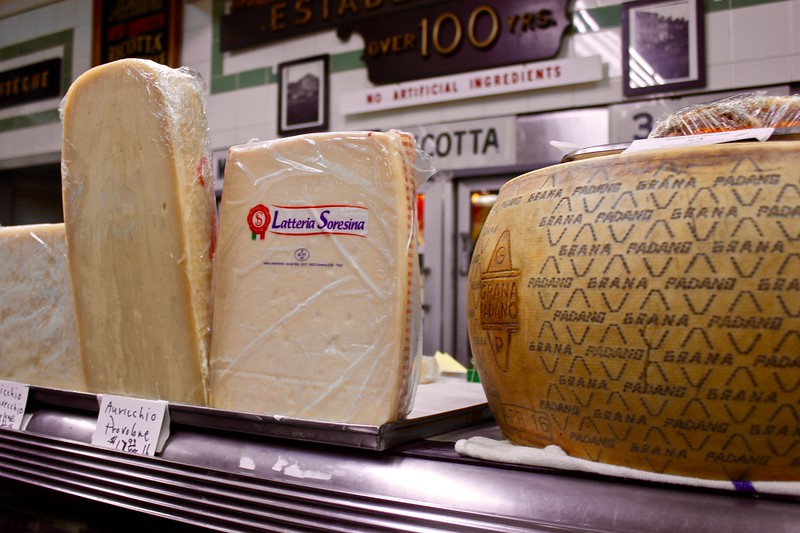 Again, Josh arranged a vegetarian tasting option for me – I enjoyed melt-in-your-mouth mozzarella and a juicy sun dried tomato, while the rest of the group also had a piece of salami on their plates. And there’s plenty to eat there besides cheese – one of the other group members sampled arancini.

Because of the cold temperatures, Josh squeezed in a bonus stop for us across the street at Ferrara, where we purchased warm beverages and cookies from its impressive display case of sweets. Back outside I excited to spot some fantastic street art adorning the brick buildings as we walked to the next stop.

We crossed The Bowery – I never knew that means “farm” in Dutch – and made our way into the heart of the Lower East side, where 500,000 Jewish immigrants packed themselves into one-square mile at the end of the 19th century and beginning of the 20th. Yonah Shimmel’s, the most unique stop on the tour, has been making and serving knishes the same way since 1910. Knishes are Jewish dumplings, and at Yonah Shimmel’s, they are served baked – not fried, which are more readily available.

No one in our group had ever had knishes before, and we were able to try two kinds – the first was the traditional version, which is made from seasoned potatoes and fried onions, and the second was a savory dessert knish, which was a dough shell stuffed with cheese and chocolate. We shared each of them among us, and a bite was more than enough because they were so dense and rich. 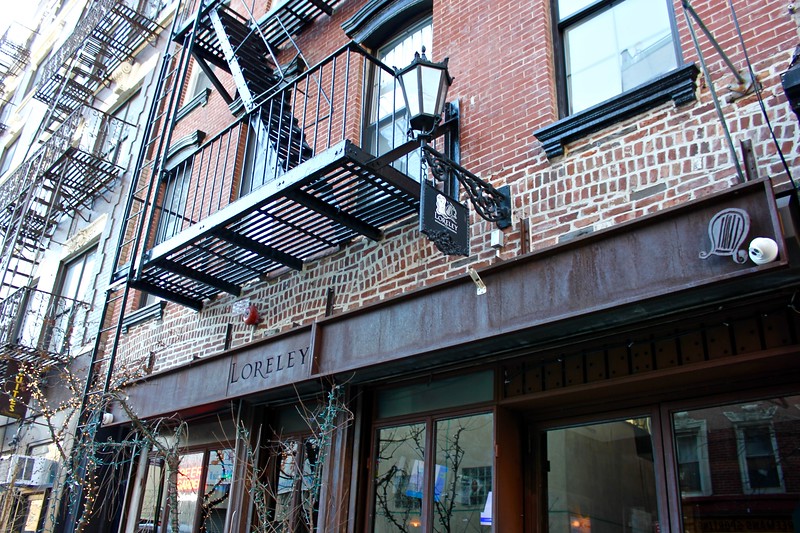 Our last stop got me in touch with the other half of my heritage – the German side. Loreley, the newest business on our list, is the largest heated outdoor German beer garden in the Lower East Side and modeled after the Brauhaus in Cologne.

January isn’t a good time to enjoy a beer garden, of course, so we all gathered inside around a long wooden table. Even though I didn’t have any appetite left, I managed to squeeze in one last snack, a freshly baked pretzel with spicy mustard. To wash it down, I chose the Weihenstephan Hefeweizen, which is from the world’s oldest brewery. 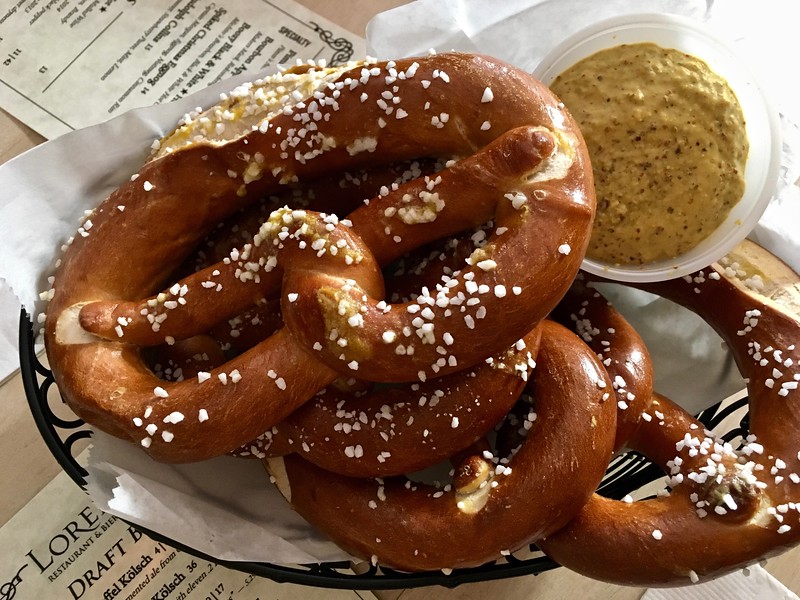 The other tour group members and I enjoyed each other’s company so much that we all sat and chatted for a while after the official tour was over. Josh was nice enough to stick around and provide the out-of-towners with recommendations on where to eat and drink during the rest of their stays. Eventually I had to make my way to The New York Times Travel Show, so I stumbled back to the Javits Center completely stuffed and excited about everything I learned.

This NYC Urban Adventures tour review was provided in exchange for a complimentary tour. 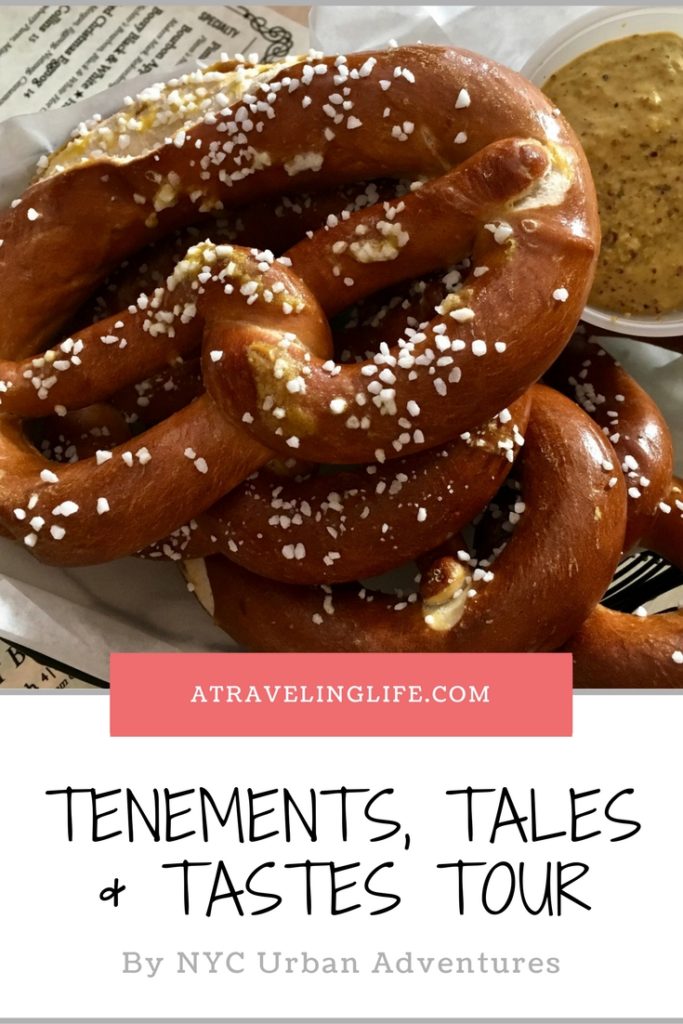