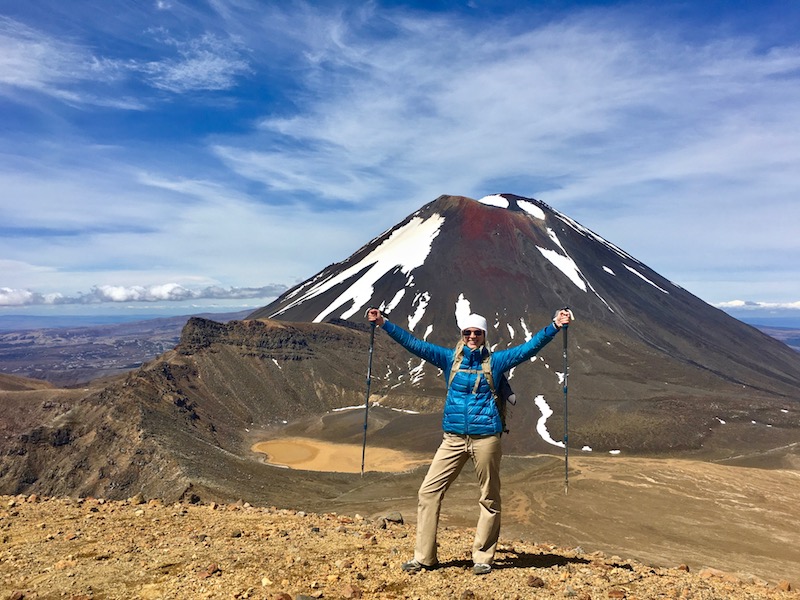 The past two months have been pretty exciting – I visited New Zealand for the first time in November, and then I started a new full-time job when I got back to Boston in December!

After hanging with other travel bloggers at TBEX in September, I was really itching to get back on the road this fall. So after working hard in October and securing my new full-time job, I was able to celebrate in a big way by taking my first international trip since March.

After months of planning, I took off for New Zealand and spent the last three weeks of November traveling around the North Island. It blew my mind that even with spending a decent amount of time there, I barely scratched the surface – there was so much I still wanted to see on the North Island, and I didn’t even get to the South Island, which I hear is even more incredible. It was my first time in this magical country, and I’m already plotting my return.

On my last day in New Zealand, I climbed to the top of Mount Victoria in the historic suburb of Devonport to take in these impressive views of Auckland’s skyline. 🌿 #visitauckland #aucklandcity

My good friends from my Denver days – Tom and Natalie – are who inspired the trip. They relocated to Auckland for Natalie‘s job (she’s a Foreign Service Officer), and I’ve tried to visit them over the years at their various posts. I also was able to rope in my friend Ian, whom I had met on the Nomad Cruise last year, into my being my co-pilot for the first half of the trip. We drove together from Auckland down to Wellington, with stops in between at the Waitomo Caves, Hobbiton, Rotorua, Tongariro National Park, and Napier. Another blogger friend, Jub the Tiki Touring Kiwi, joined me to do the Tongariro Alpine Crossing, a popular day hike, and he was nice enough to accompany back to Wellington, so I wouldn’t have to drive on the “other side” of the road by myself (unfortunately, Ian had to stay in Napier due to an illness).

To kick off the second half of my trip, I flew back to Auckland, and then spent a relaxing Thanksgiving weekend exploring the Coromandel peninsula with Tom and Natalie. Unfortunately that meant I had to miss Thanksgiving with my family, but I got to hang out with friends in a very beautiful part of the world. We went on a few fantastic hikes, played board games and drank a lot of good wine – a near-perfect holiday in my book!

I returned from New Zealand with a major case of jet lag, and I only had a few days to adjust to East Coast time before starting my new job as marketing director at a community college here in Massachusetts. Not only could I not fall asleep before 2 a.m. for nearly two weeks, but I also haven’t had a full-time job in five years, and I’ve never had to drive to work before. So, needless to say, it’s been a big change, but four weeks in, I’m getting used to it.

I’ve been able to have some fun outside of the office, though. I got to check out the new winter menu at Sky Lounge, the roof-top bar at YOTEL in Boston’s Seaport. The bar generously hosted my birthday party this past May, and it was fun to go back and sample some of their cold-weather delicacies like the 1773, which is made with bourbon, lemon and black tea syrup (my new favorite winter drink!).

I also got to tour The Revolution Hotel in the South End. With 164 rooms, both dorms and singles, it’s a much-needed, budget-friendly addition to Boston’s uber-expensive hotel scene. It’s also very very hip. It’s decor highlights Boston’s role in art and innovation – the lobby is dominated by an impressive mural of key historical figures and events by artist Tristan Eaton and also features a column made from Massachusetts inventions like the telephone and lawn flamingos. It also celebrates the building’s past as a YWCA by incorporating some original details like mailboxes and light fixtures.

And, since we were given off both Christmas Eve and Christmas Day off at work, I was able to travel to New Jersey to spend the holiday with my family. Don’t tell them, but I was most happy to see my dog, Lucy, who has been staying with my parents while I adjust to my new schedule.

Now that I have a full-time job again, my schedule isn’t as flexible as it used to be when I was self employed (but, luckily, I do get generous paid time off). I’m going to squeeze in two weekend trips in January, though – to New York City with my college friends for our annual get together and to Worcester, Massachusetts, to check out the new AC Marriott. Looking forward to having you follow me in 2019 as well!