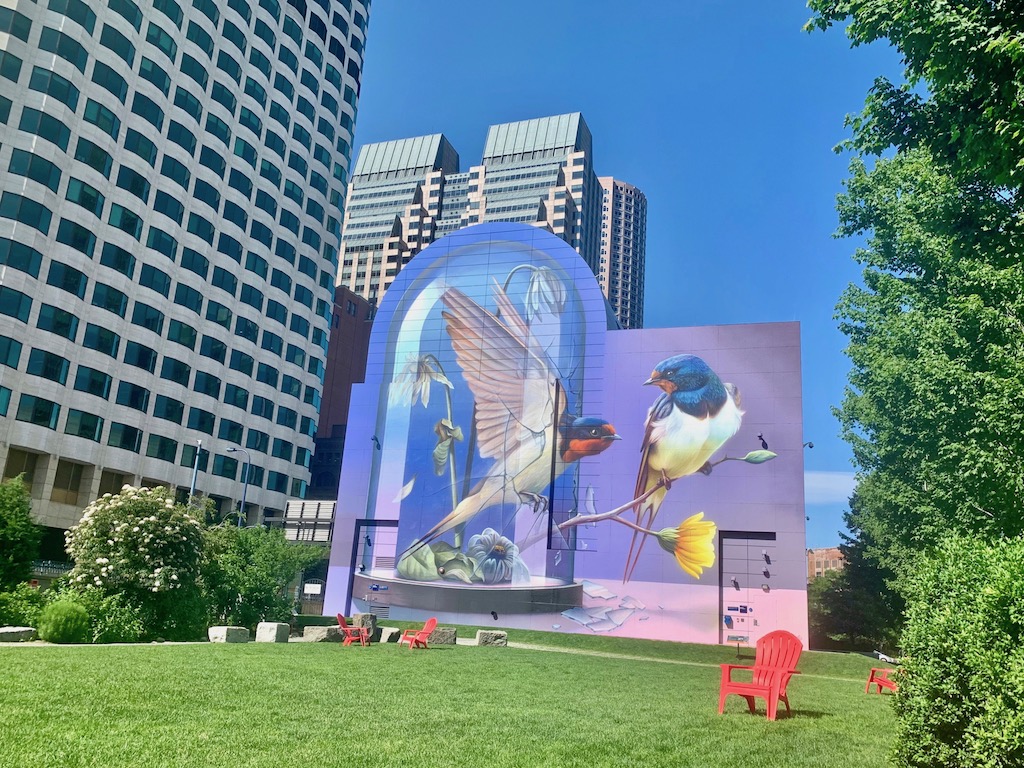 In April and May I tried to strike a healthy balance between work, traveling, spending time with friends and family, and self-care, but then I went full-speed ahead once summer arrived. Here’s what I’ve been up to.

New Englanders need to make the most of the warmer months of the year, since winters tend to be long and brutal, and I’m no exception. Even though I didn’t travel internationally this summer, I was able to take a deeper dive into a few of my favorite places in Boston and elsewhere in the region.

Boston has a large and lively Pride parade in the South End every year, and it’s always a lot of fun to join in on the festivities. This year, I coincidentally booked a one-night stay at The Revolution Hotel that Saturday, and I was delighted to discover it was right on the parade route.

My friend Kristin met me in the South End that Saturday, and first, we stopped by POP FunHouse, an Instagrammable installation celebrating the Dominican Republican, including its street art, waterfalls, adventure activities, and gemstones. The event coincided with lots of negative news out of the DR, so it was nice to see the country’s more positive points. After snapping a few shots, we grabbed a table next door at Beehive in full view of the parade, and split a bottle of wine and some appetizers. It was a very entertaining and relaxing afternoon.

While I had visited The Revolution Hotel before – I had won a one-night stay during an Instagram event earlier in the year – this was my first overnight stay. Since it’s a high-end hostel/budget hotel, the rooms are simple, yet memorable – there are fun touches like song lyrics by Boston artists painted above the bed. I’ve never needed my hotel rooms to be spacious or offer a lot of bells and whistles, so it was perfect for me. And in a city like Boston, you’re never in the room much anyway. I spent a very relaxing evening curled up reading in the comfortable bed then hung out working in the cozy and colorful lobby the next day.

Father’s Day weekend meant a lightning-quick trip home to New Jersey. Then at the end of June, TravelCon, a travel blogger conference, was held in Boston, so I got to catch up with some of my favorite blogger friends. I attended the conference on Saturday and joined in the social festivities each night, even dancing into the wee hours of the morning (I never do that anymore!).

In July I revisited three areas of New England that are favorites of mine – Providence, Rhode Island; and Lowell and Greenfield, Massachusetts.

A food writer friend, Amanda, had a press trip scheduled to Providence over July 4 weekend, so I decided to tag along. Even though it’s only a 35-minute train ride from Boston, I hadn’t been there in years. It was a sweltering hot day, so we spent a lot of time inside eating. First we checked out the new all-vegan market complex, Plant City – I enjoyed jackfruit tacos and a margarita – and then we doubled up on desserts, making stops at both Aleppo Sweets – owned by Syrian refugees – and PVDonuts.

My dad comes to visit me in Boston each summer for about a week, and during that time, we roadtrip to Western Massachusetts for the Green River Festival in Greenfield – it was our ninth year attending together. This year, we stopped at Lowell on the way out and spent the morning touring the Lowell National Historic Park to learn about the important role the city played in the Industrial Revolution. I had been to Lowell a few times before – I’ve enjoyed sampling its Cambodian restaurants (it has the second-largest Cambodian population in the U.S.), and in the summer, I always try and make one of the outdoor concerts at Boott Cotton Mill.

At the end of the month, I went back to Fenway Park for the first time in a long time (shh, don’t my Boston neighbors). Baseball games are always enjoyable with big pretzels, expensive beer and good friends on a warm evening. I didn’t pay much attention to the game, but the Sox killed the Yankees – and since it was a blowout, I didn’t feel guilty leaving early. 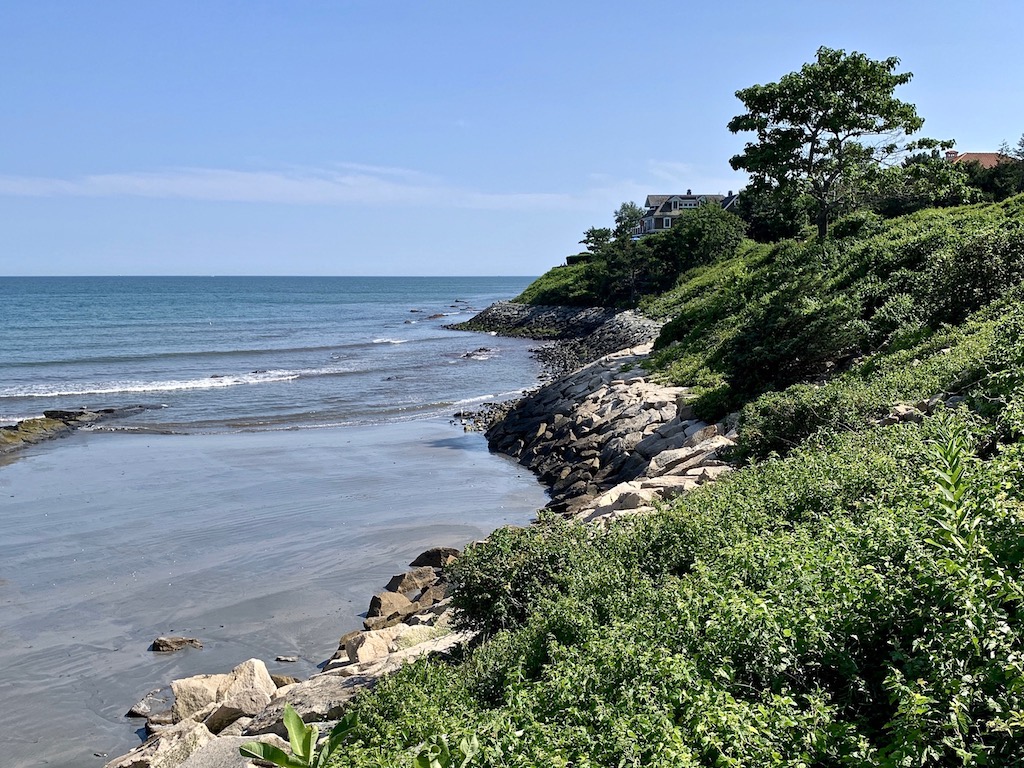 Another one of my favorite summer destinations is the beach town of Newport, Rhode Island. Luckily, one of my close friends has a house in Newport and another has a house in nearby Narragansett, so that’s where I headed the first weekend of August. I luckily was able to get in two perfect beach days and enjoy a lobster roll – I brought back a nice tan as a souvenir that I hope lasts well into fall.

The biggest change for me this summer was professionally. I had returned to the full-time working world for about seven months, but it ultimately wasn’t for me, so now I’m back to freelancing. Since I’m home more, I decided to try fostering a puppy named Wilson. What was supposed to be one week has turned into three+ weeks, but we’ve had a lot of fun together. It’s been really therapeutic to try and tire him out with walking and running on the beach in my neighborhood. My own dog is 14 (she lives with my parents), and I’m definitely not used to all of this puppy energy!

In the evenings, I’ve been enjoying Boston’s fantastic beer scene. Some of my favorite places have been Cisco’s beer garden in the Seaport, Trillium in Fort Point, and Night Shift’s new location at Lovejoy Wharf. Don’t worry, I’ve balanced out the drinking with lots of yoga and bike rides!

Now that I have a little more flexibility with my schedule, I’m looking forward to a lot of travel this fall. I’m ringing in Labor Day with my family here in New Jersey. Then in two weeks, I’m heading to Syracuse, New York, for my 20th (!) college reunion. At the end of September, I’m coming back to my hometown for a hosted trip with Destination Lehigh Valley – I’ll be exploring the area with Brianna of The Casual Travelist, who went to my rival high school.

Then in October I’m back to New York – New York City, actually, to participate in the Study Abroad Summit. My next international trip will likely be in November, when I attend WITS Riga – it will be my 6th Women in Travel Summit!

Filed Under: Monthly Roundup
April and May: All About Balance
September: Homecomings