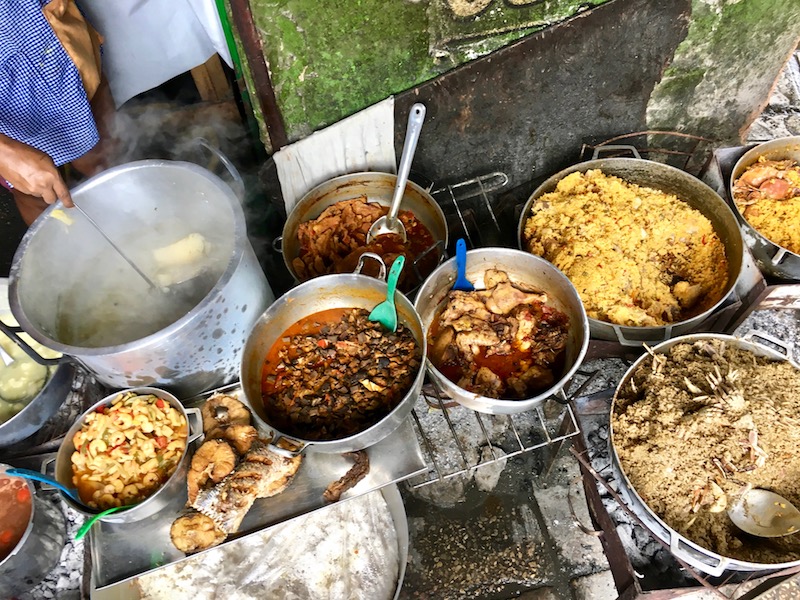 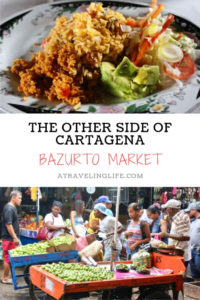 In Spring 2017, I made my second trip to Cartagena, Colombia, before setting sail on the Nomad Cruise to Lisbon, Portugal. During that short visit, I decided to head outside of the old city’s walls and experience the “real” Cartagena. As a former ambassador for Visit.org, I took a very off-the-beaten-path Bazurto Market tour with Cartagena Insider.

I clutched my camera to my chest as I closely followed my guide through the narrow aisles, trying desperately to keep it dry as rain rushed hard and fast off the tin roofs that cover the narrow rows of vendor stalls. Admittedly, this was not a part of Cartagena, Colombia, that I had ever knew existed until I set out on a Bazurto Market tour with Cartagena Insider, a social enterprise operated by the NGO Fundación por la Educación Multidimensional (FEM).

Exploring the Other Side of Cartagena

My first trip to Cartagena had been with a friend almost two years prior, and like most tourists, we mostly stayed within the walls that surround the old city, a UNESCO World Heritage site that dates back to the 1500s. We wandered leisurely through the cobblestone streets, sipped mojitos at outdoor bars and retreated to our apartment in each afternoon to swim in the pool. Less than 10 hours after landing in Cartagena for my second trip; however, I found myself experiencing what life is really like for many Cartageneros outside the walls.

FEM is one of the few organizations in Cartagena dedicated to empowering the local Afro and indigenous communities, which are located on the outskirts of the city and largely shut off from its riches.

Colombia has one of the most extreme wealth gaps in the world, and according to FEM co-founder Ana María González, social mobility is actually three times as hard for Afro and indigenous people. Access to education is limited – especially for those who live in rural areas, which have a hard time attracting teachers – leaving teens vulnerable to sex trafficking, gangs and drug use. So three years ago FEM launched its “insider” tours of Cartagena to generate both much-needed income for FEM’s programs and as well as provide jobs for young people in the communities it serves.

The goal of the Bazurto Market tour and other Cartagena Insider tours is to lure tourists away from away from their lattes and gelato, and show them that there is more to Cartagena than colorful, colonial homes. At first local hotels and tour operators were skeptical of FEM’s plan, Ana said, not thinking tourists would want to see the “other” side of the city. But they were wrong. Today the tours cover more than 50 percent of FEM’s operating expenses, and that percentage continues to grow.

Visiting the Bazurto Market in Cartagena

My guide that rainy morning at Mercado de Bazurto – Bazurto Market – was an impressive young woman named Marcy Luz, who works both as a tour guide and bookkeeper to support her family. Ana joined us to serve as our translator, since my Spanish skills are basic at best.

The first stop we made was at a large outdoor metal working shop at the market’s edge. It is actually a co-working space of sorts, with five or so independent metalworkers all working on their own projects simultaneously – one man showed off the frame for the lanterns that hang from the famous horse-drawn carriages that cruise the old city.

We then continued to work our way through the damp, dark maze of the market, passing sellers hawking everything from spices to vegetables to clothing to household goods, occasionally needing to seek cover from the rain – at one such stop, I stepped backward and right into a hole in the ground, sinking into mud (and who knows what else) up to mid-calf.

The market, usually a hive of activity, was rather subdued on that Tuesday. Marcy Luz and Ana explained that the weather was likely keeping most shoppers at home. However, it seemed the faithful were still there – mostly older men who were perched in brightly colored plastic chairs deep in conversation about the day’s events or enjoying their favorite market eats.

It was only about 10:30 a.m. when I was offered a beer, which I happily accepted, since the rain had absolutely no effect on the heat and humidity of the day. I sipped it while learning about Champeta, a popular Afro-Colombian style of dance music, at a booth specializing in renting DJ equipment and CDs for Champeta parties around town. I was generously gifted a Champeta CD that has since become a favorite of mine.

At the next stop, a little further into the market, was an intersection where a handful of teenage boys were lined up painting on large white pieces of paper hanging on the walls in front of them. In assembly-line style, they each used a different color to add a particular detail or design to posters advertising upcoming Champeta parties – I got a personalized one to take home. I had seen some of these posters on fences on the outskirts of the market and was surprised by this old-school method of advertising. But I guess they get the job done – Marcy Luz and Ana said these parties regularly draw hundreds of attendees.

My favorite souvenir from the market was actually an empty soda bottle. It doesn’t sound like much, but the bottle was packed with a variety of dried herbs and plants that were selected, chopped and inserted in front of me by a traditional healer. I was instructed to add rum, and then drink it to settle an upset stomach or apply it topically to cure cuts and scrapes (I haven’t used it yet). Marcy Luz and Ana told me this type of medicine is, unfortunately, dying out in Colombia as young people seek out modern treatments instead of the old ways – as one example, only seven or eight midwives are left in all of Cartagena.

The last stop of the day was in an area of the market known as Pascado Frito, where you can buy fresh fish to take home or eat right there on the spot. It’s also where you’ll find Restaurante Cecilia, which has enjoyed a bit of fame thanks to a visit from Anthony Bourdain for his “Parts Unknown” TV show. I was surprised to find Cecilia herself there that day. She welcomed me with a wide smile as she stirred about a dozen pots cooking over hot coals, and scooped out rice, fish and other delicacies for the few customers who started gathering for lunch.

Even though I wasn’t that hungry, I knew this meal would be too good to pass up, so I dug in. I’m pretty sure the rice had shark in it, and I’m a vegetarian. It was OK, though, because I was tasting the real Cartagena.

This post on my Bazurto Market tour originally appeared on the Visit.org blog.

Filed Under: South America
The Best Things to Do in Antigua: A Sustainable Guide